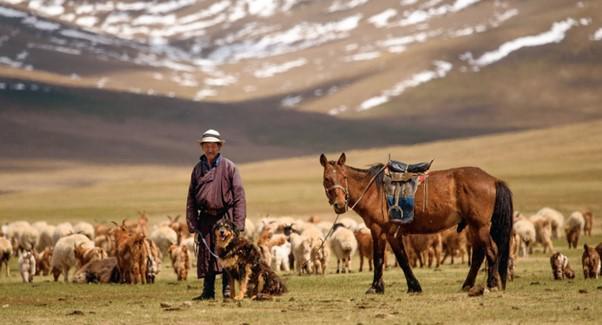 In the second of our series on demystifying carbon credits, Carbon Growth Partners Chief Impact Officer, Charles Bedford, explains how in Mongolia, old and new worlds come together.

Carbon Growth Partners has acquired credits generated by the Ttsetsii wind project in Mongolia, home to some of the world’s largest, most intact and most threatened grassland ecosystems.

As well as being a hotspot for biodiversity – including endangered snow leopards, eagles and wolves – Mongolia’s grasslands are a hot spot for coal, copper and gold.  A mineral-rich country as large as California, Oregon, Washington and Nevada combined, the Mongol Empire once ruled the world from Hungary to the Sea of Japan. Suffering as a Soviet satellite state for 70 years, traditional Mongolian-Tibetan Buddhism was ruthlessly purged, traditional herding regimes were altered and when the USSR fell, Mongolia went through a period of economic hardship and instability. However, thanks to its high education and literacy rate (98%), its many foreign-educated returnees and an entrepreneurial national spirit, the country was able to make the transition to a market economy relatively rapidly.

This transition exists alongside a deep reverence for the land and for the survival of the people that it supports; almost all Mongolian people are only one or two generations descended from nomadic herding.  Even today, many university-educated couples leave the capital Ulaanbaatar in favour of a life on the steppe, following their animals from summer to winter pastures, living in temporary gers (known as yurts in Russia) that can be packed up in an afternoon and pulled along by horses. These gers confer only a few concessions to modern life over what Genghis Khan may have used: solar panels to charge a couple of car batteries that can power a satellite tv connection and lights for reading at night.

Traditional livestock grazing, however, has proved insufficient to maintain the level of educational and governmental services that the Soviets had provided, so Mongolia embarked on a path to develop the nation’s mineral resources.  While bringing relative wealth, the exploitation of these resources has come with a cost; an abundance of cheap coal, a cold climate and inefficient infrastructure mean Mongolia is one of the world’s highest per capita carbon emitters. Ulaanbaatar is one of the most polluted cities on Earth because of the antiquated coal plants in the basin in which the city sits.
Fortunately, Mongolia’s other great natural resource is free and abundant wind energy. Advances in wind turbine technology and falling prices have allowed for wind to be added to the nation’s energy mix —a promising sign for the land as well as the sustainability of energy supplies. Wind projects have been partially publicly financed, with financing from carbon credits making clean energy competitive with the country’s old and cheap coal-fired power plants.
The Tsetsii project provides 50MW of power, displacing coal to provide nearly 3% of the country’s electricity. It created 200 jobs in construction, sustains 65 jobs in operations, reduces emissions by nearly 150,000 tonnes per annum and provides an alternative land use to the degradation of mineral extraction.
A single clean energy project cannot deliver ecological and economic utopia, but the transition from fossil fuels is a longer-term project, vital for a country that seeks economic development alongside clean air and a safe climate. Corruption is low, education levels are high and the Mongolian people debate these issues informed by facts and science. They know the trade-offs that have to be made and are committed to a sustainable future.
The modern and ancient worlds come together in Mongolia, and Carbon Growth Partners is proud to have helped to finance one step forward on the nation’s path to ecological, economic and energy security.